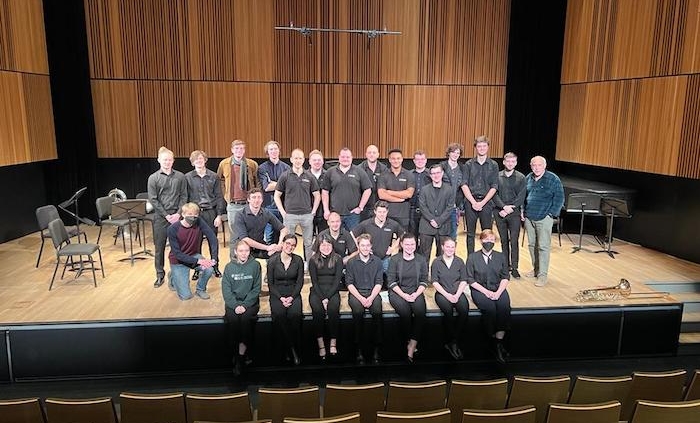 With this being my first time in North America with my Septura colleagues, I had been forewarned of the vast distances we would be travelling between concert venues, and you join me for this blog entry just in time for one of the longest journeys of the trip.

We commenced the 716 mile drive from Harrisonburg, VA to Montreal, Canada after a short morning rehearsal at James Madison University’s fantastic Forbes Center for the Performing Arts. With a predicted journey time of well over 10 hours you might think we had plenty of time for ‘team bonding’? Not quite the case as we all plugged in to watch our respective Netflix series (other streaming platforms are available) or settled down for some well earned kip, a clear sign of the busy tour so far. We split the journey to Montreal up, stopping overnight in Poughkeepsie, NY after the first 7-hour stint. After a tiring day of sitting down doing nothing we all went straight to bed, not often the case with brass players on tour!

Upon leaving the following morning to complete our epic trek to Montreal, spirits were high, all of us very enthusiastic about our concert that evening. Fuelled by plenty of coffee and seemingly non-stop banter, the journey flew by despite a lengthy lunch stop for our guest bass trombonist Simon Minshall to showcase his infamous eating skills.

On arrival at McGill University in Montreal, we were greeted by one of the university’s trumpet professors, Russell DeVuyst who took great care of us during our short time in Canada. Straight to rehearsal then as we eagerly rehearsed the second of our two concert programmes on the tour ‘Pictures at an Exhibition’. The clue is in the title, with a second half containing Mussorgsky’s masterpiece paired with two staples of the Septura repertoire to make up the rest of the programme. Our Prokofiev Suite and Shostakovich’s 8th String Quartet are both favourites of mine and pieces I know everyone in the group loves to perform.

We enjoyed a wonderful concert in McGill University’s Pollack Hall and afterwards took the opportunity to meet some of the students we would be working with at our chamber music workshop the following morning. It’s been a highlight of the trip for me to be able to connect with our audiences after the concert, making new friends and reconnecting with old acquaintances. It’s great to feel the support the group has on this side of the pond and hear how well the concerts have gone down with fans and promotors alike.

On a post-concert high, we enjoyed some much needed food and refreshment on recommendation of our effervescent host, Russ. Designated eater Simon Minshall again came up trumps on his food order with a magnificent hot dog, however I wasn’t completely sold on the local delicacy ‘poutine’. Chips with cheese and gravy… make it make sense please?!

The next day, we were privileged to hear the talented students of McGill University in a chamber music workshop. It was a pleasure to see their progress during the class and we also managed to dodge the frequently asked question ‘Why no French horns?’ without offending any horn players in attendance, or at least we hope so!

A quick stop at Montreal’s ‘Time Out’ food market for a bite to eat and a rebalancing of coffee levels and we were on the road again.

Onwards to Manhattan for our New York City debut at The Town Hall!