The weather. We often make fun of ourselves in the UK for being so obsessed with it. The last few days have demonstrated that if anything we don’t worry about it enough. We had been eagerly anticipating our debut in the Sounds of the Dolomites festival, which would see us trek high into the mountains for an outdoor performance. The scenic backdrop promised to be spectacular, and it was sure to be a concert to remember. Alas, with just three days to go word came through that, due to the weather forecast, the concert had been moved to an indoor venue. Oh well we thought, that was always a possibility, and lightning and metal instruments probably don’t make good bedfellows at high altitude. 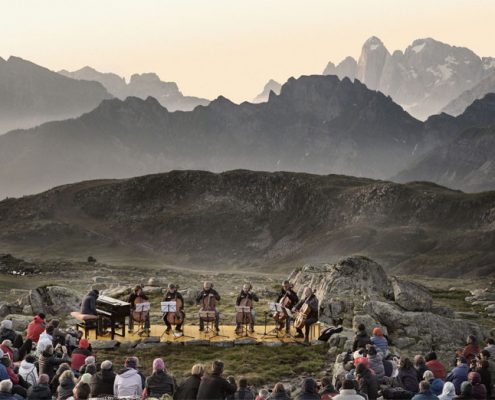 This would have been where we performed – there’s always next time!

What we weren’t anticipating was a text message from British Airways telling us that our flights had been cancelled with 24 hours notice. Various possible reasons were put forward, including thunderstorms and problems at air traffic control. Whatever the cause, we had to find a way to get to Italy – if you’re running a music festival you can’t really sub in an entirely different act for a concert that large numbers of people have bought tickets for, so for us as the artists it doesn’t matter what the circumstances are, you get there.

Being the height of the summer holidays, replacement options were thin on the ground. It quickly became apparent that we weren’t going to be able to fly to an airport anywhere near the concert venue in northern Italy, so it was time to cast the net a little wider – would there be time to drive there from Rome? Munich? Zurich? Could we get the train or drive the whole way? Eventually, after seven hours of phone calls and Skyscanner searches, and more than one loss of temper (once again, sincere apologies to Jessica at BA) a solution was found: a 7am flight to Frankfurt, and a further flight from there to Milan. The only question that remained was how we were going to get the tuba there. I won’t bore you with the details, but after a few hours sleep and more phone calls (and another loss of temper, sorry to Ingrid at Lufthansa) we were all set.

Our alarms set for 3.40am the following morning, we headed to bed, glad that we were still going to make the trip, but with some trepidation at the day ahead of us. The journey itself went fairly smoothly (although if you can understand the signage in Frankfurt airport you’re a better person than me). Eventually we landed at Milan Malpensa, already with 10 hours of travel under our belts, and a further 4 to come on the bus to Trentino. We arrived at the Auditorium del Polo Scolastico di Cles about two hours before the concert was due to start, and after a quick sandwich and shower (thanks to our Italian agent Rosalba for bringing the towels – an absolute godsend) we headed into a rehearsal. This was the first time we were to perform our new arrangement of Tchaikovsky’s Swan Lake Suite, so we did a thorough check of the musical ‘corners’ that were most likely to pose problems – generally involving changes of tempo or character. The other works in the programme, Debussy’s Préludes and Gershwin’s An American in Paris, are very familiar to us so didn’t need much rehearsal, which we were grateful for given the time pressure. 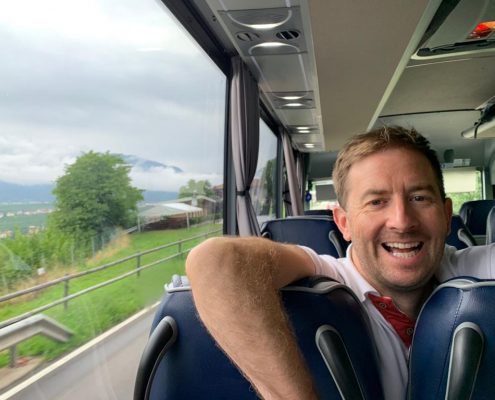 14 hours of travel and morale is still high

I should take a moment here to point out that only five of us had to endure this gruelling schedule. Trombonist Pete Moore was already in Italy taking part in another festival, and Matt Knight had flown out a day early to pick him up and drive him north to our hotel. The good news is that they were very supportive, and no mention was made of their day spent in a mountain chalet, enjoying a walk by the nearby pristine lake, and a leisurely three-course meal at a local hostelry, followed by a much-needed 2-hour nap.

I’m often amazed by what my fellow Septura members are able to deliver in difficult circumstances, but never more so than on stage during this concert. Swan Lake is a great addition to our repertoire, and much like our recently-recorded version of Tchaikovsky’s Nutcracker, we found that his music works incredibly well for brass. 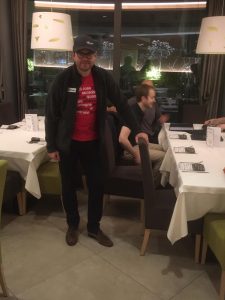 After the concert we were whisked off to a local pizzeria for a meal with Rosalba, then it was back to our hotel to finally get some sleep. Tomorrow we head to Lithuania which means dealing with more airline staff, but surely we’re due some good karma…?