Day 3 started slowly, at least by Septura’s touring standards. We didn’t have an early airport call to contend with so a few of us began with a leisurely breakfast at the hotel in Bad Horn Meinberg. Others took the opportunity to catch up on some sleep or adhere to strict fitness regimes in the chilly German rain. Matt Knight even took advantage of the morning to serenade the entire hotel with his trademark trombone warm-up routine. After a busy couple of days on the embouchure I decided it was the mark of true courage to leave it in the case and allow my chops a day of recovery. We all looked forward to a (hopefully) relaxing day traveling to Ossiach in Austria, but as is often the case in these adventures abroad, you can never fully prepare for what the travel gods have in store for you!

Leg 1 of the journey to Austria nearly began with a casualty. Our Artistic Director, 2nd B-flat trumpet (doubling flugelhorn and occasional percussion) and bus driver, Dr Simon ‘Traffic Cone Magnet’ Cox nearly ploughed into a sapling a mere 30 feet from the hotel whilst syncing navigation devices. To be fair to Coxy, the young tree had no business being planted in the middle of the lane, and I for one would be surprised if it were to survive to a leafy old age. The near-miss provided us with a rare opportunity to tease Simon about the infamous incident in Dallas where a traffic cone appeared out of thin air and propelled itself at a previous Cox-piloted battle bus. 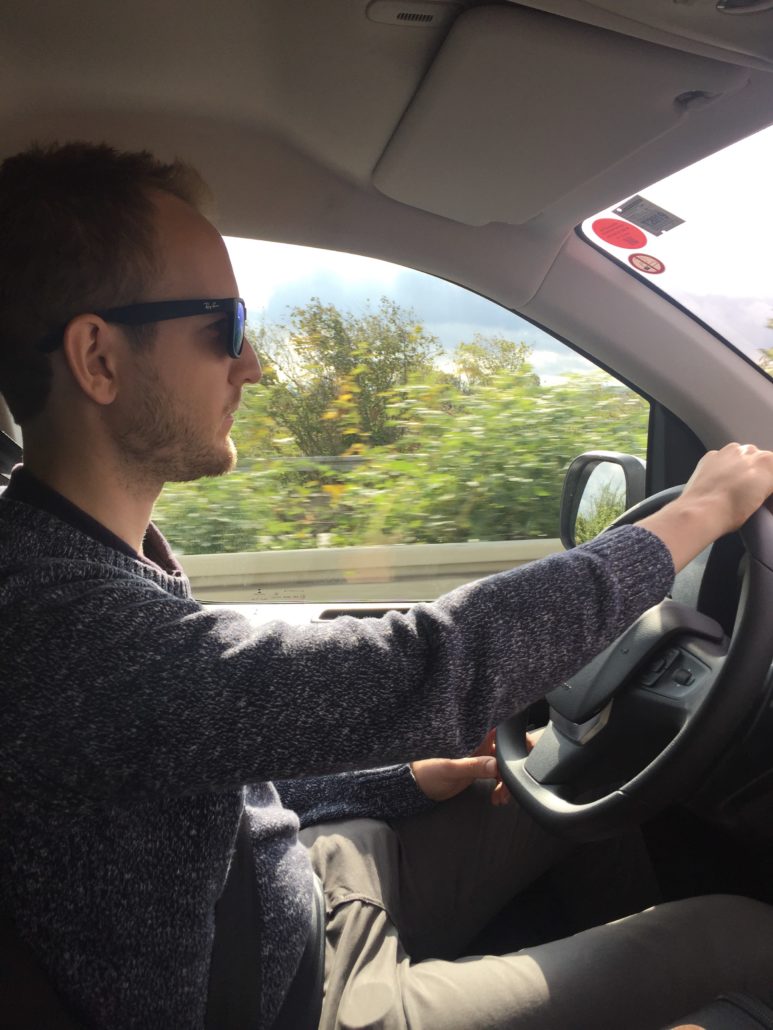 We were faultlessly driven along the congested but swift Autobahn tarmac to Düsseldorf airport, roughly 2 hours from our starting point. Our travel arrangements for this trip were thrown into disarray earlier this month as the airline which a few of our flights were booked with, Air Adria, filed for bankruptcy and ceased operations. In addition to making today’s travel a bit less convenient (involving different airports and more miles on the Autobahn than planned) I also have a less than straightforward journey to look forward to on Saturday when returning to London and my ‘day job’ in the West End. 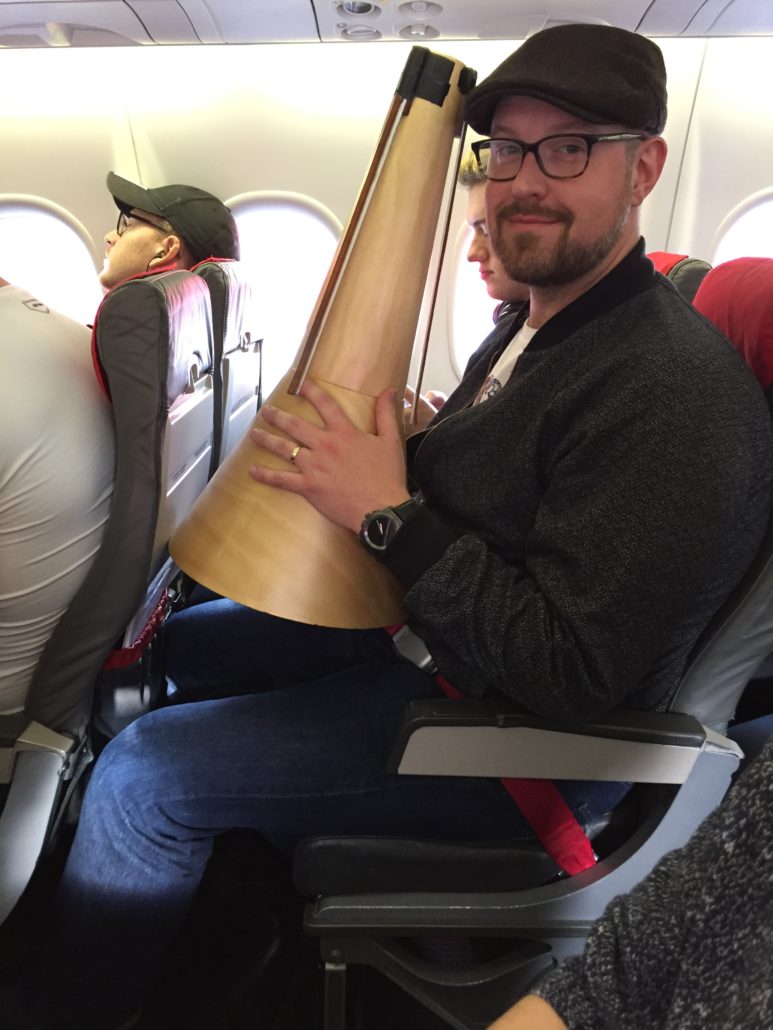 What followed was yet another edition of the traveling trombonist’s worst nightmare: our Austrian Airlines flight to Graz was on a Bombardier Q400 prop plane, and from experience as recent as our April tour in New Zealand I knew I had little to no hope of getting my precious and irreplaceable vintage bass trombone into the overhead bins. Heart rates accelerated, Pete Moore and Matt Knight boarded ahead of me and struggled unsuccessfully to load their own beloved hooters into the storage provided. I now knew I had no hope to get my girthy bass trombone bell into the overheads. With no flight crew cabinets available we knew we had to improvise or risk damaging the tools of our trade by surrendering them to the baggage handlers to stow in the hold. We quickly and calmly nestled our cases under our seats. Thankfully the air hostesses turned a blind eye and focussed their attention on Sasha’s tuba, and particularly its carry-on luggage (the pesky ever-present tuba mute). Another crisis averted, but another one potentially awaits me on my travels with the same airline on Saturday.

Simon and Matt plugged away at their Dorico music notation software, using the time in the air to arrange music for some upcoming Septura projects. I diligently kept watch over their shoulders to ensure that Knighty (in particular) didn’t cheekily pawn off any overly difficult lines into the bass trombone part whilst allotting himself a luxurious amount of rests. The Austrian Alps cut a fine figure in the distance and, as the sun set brightly behind them, we descended to the tarmac. 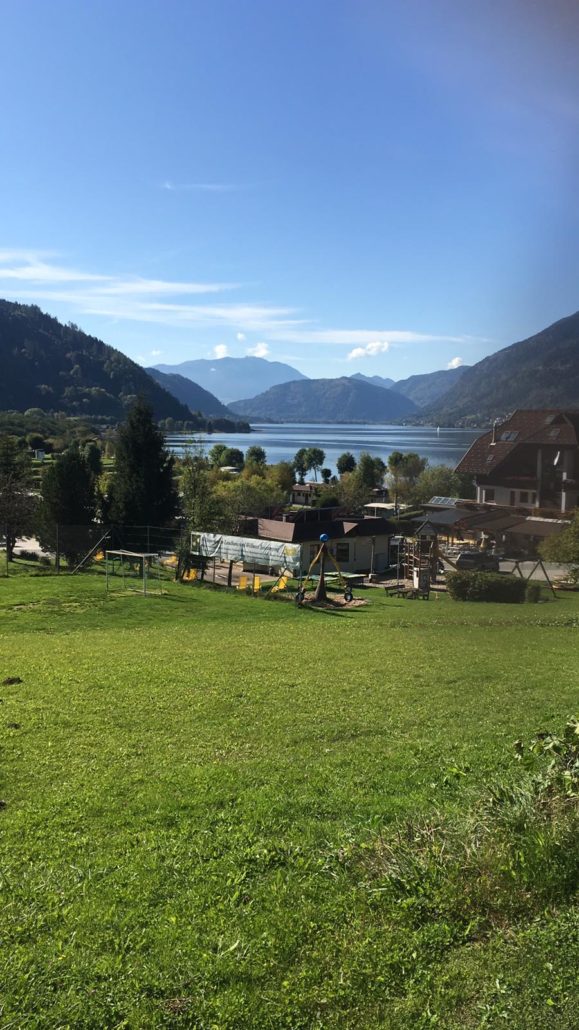 Shortly after landing in Graz we were back in another battle bus for the final leg of our journey to Ossiach. Just under 3 hours later we were unloaded in front of the Carinthian Music Academy, which for this engagement served as both the concert venue and as our accommodation. Though it was dark out it was apparent that Ossiach was a town with great natural beauty, nestled between mountains and a lake. The air was crisp and cleansing – a marked contrast to the stale battle bus air. 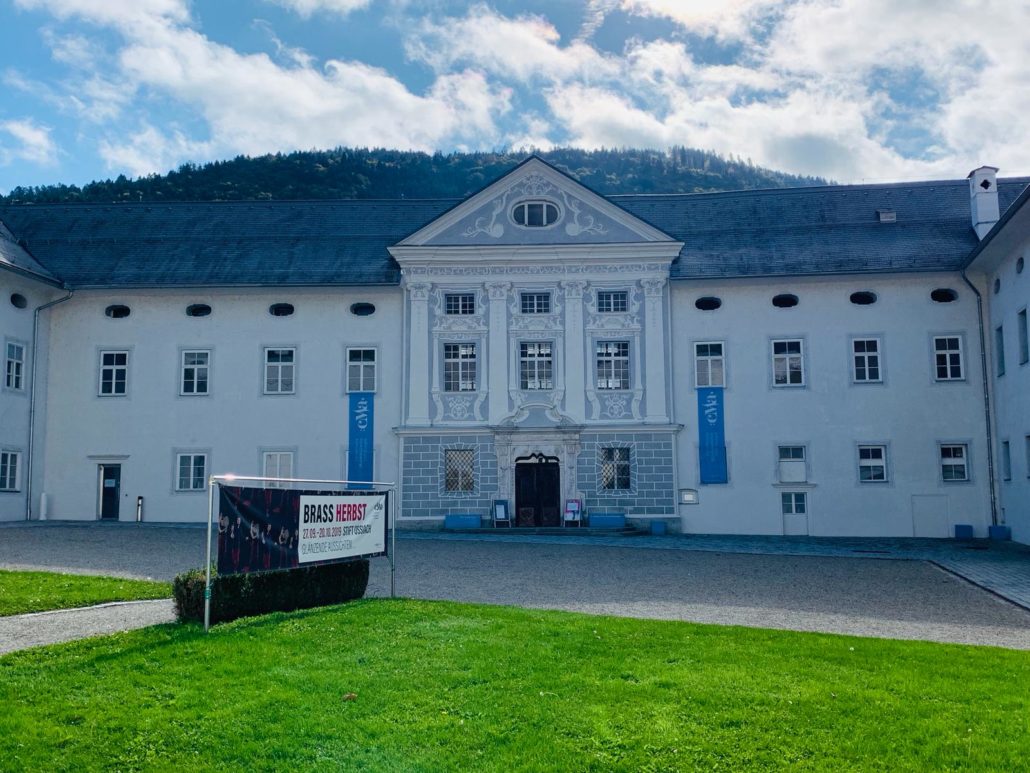 Our humble accommodation in Ossiach.

We were directed to a seafood restaurant and spent the waning hours of Day 3 sampling local fare, including a delicious lake trout and a bottle or three of Roter Veltliner. 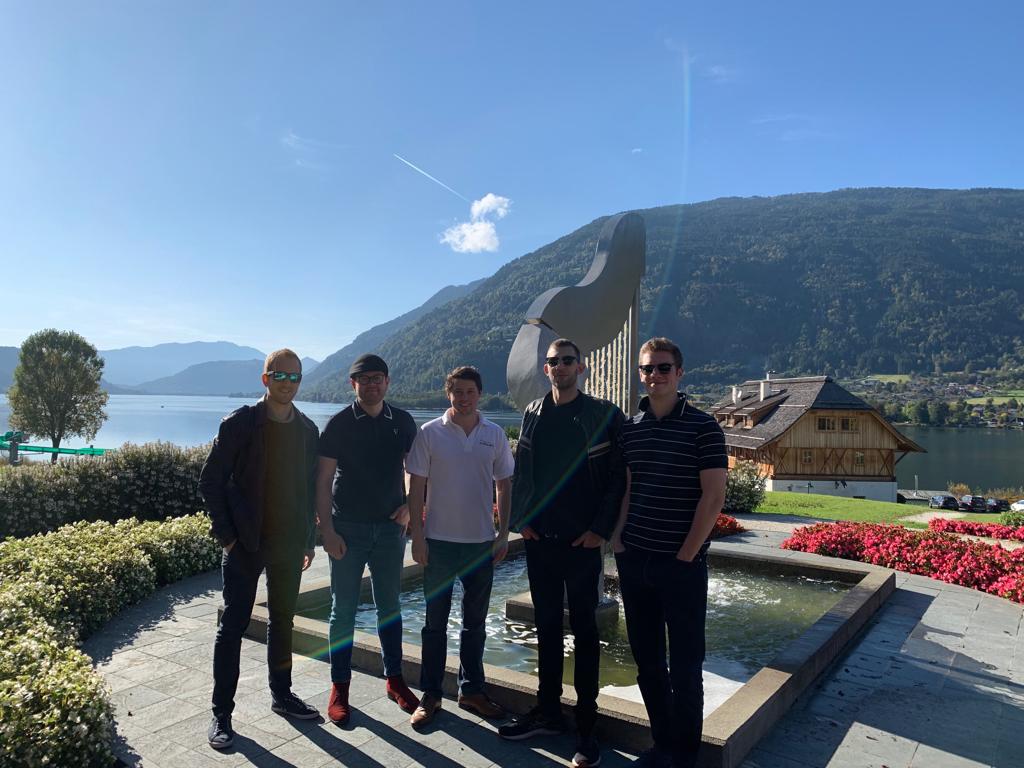 Day 4, the final day of our tour, was sunny and brisk and highlighted the elegant aesthetic of our venue. The Carinthian Music Academy is built on the site of the Ossiach Abbey, and has existed in its current form since 2009. Our appearance here is part of their 2019 autumn brass festival, and our concert will be in the Alban Berg Concert Hall: a modern concert hall built across from the chapel on site. We were given access to the hall for the entire day, which made it quite convenient for individuals to visit its luxurious acoustic for practice and warm-up sessions before gathering for our afternoon rehearsal and soundcheck. While the bulk of the septet had lunch, coffees and apple strudel on the sunny lakeside Alan had an impressive 20k run around most of the lake. We gathered for rehearsal to go over the trickiest corners from the challenging ‘Human Nature’ programme, tonight being this edition’s second ever outing. 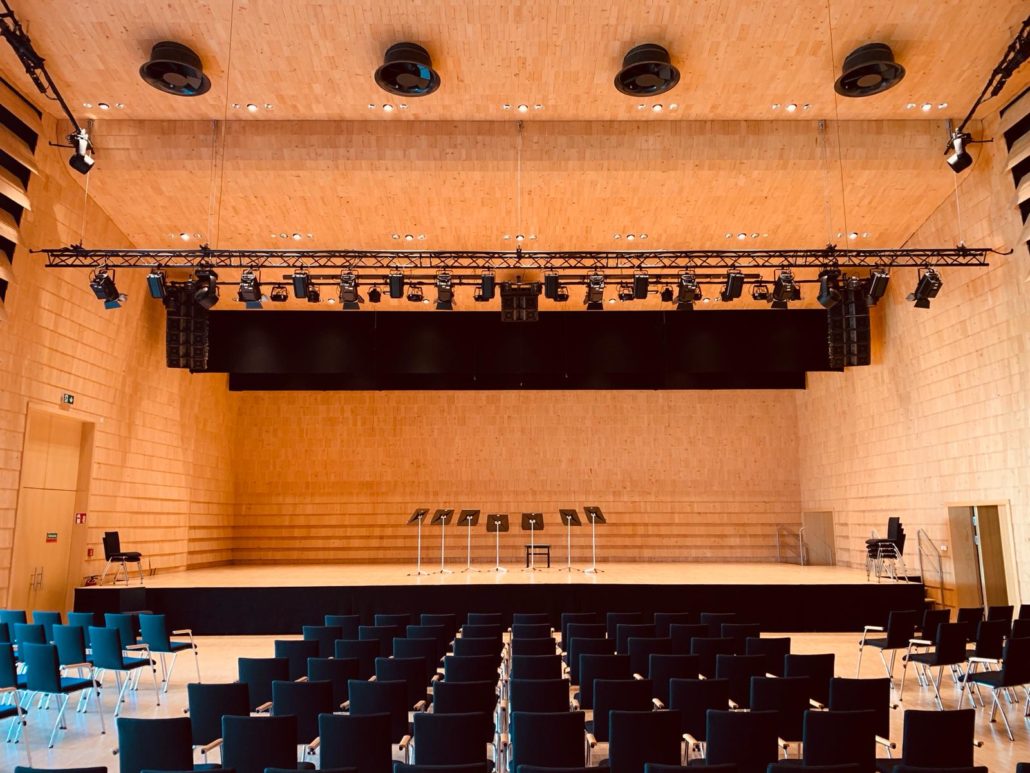 The programme is what I might call a ‘slow burner’, with much of Blow’s Venus and Adonis being a funeral march and Skelbred’s Imprints featuring tragic themes centred around mass extinction. The audience appeared receptive and I hope we didn’t drive anyone to a deep depression! The second half starts with our most-streamed Spotify track, La Papillon et la Fleur, featuring Simon Cox and his trusty Flugelhorn ‘Frosty’. Safe to say, from that moment on we had the audience in the palm of our hand. The remaining Fauré mélodies feature much of the rest of the group as soloists, though Sasha and I remain very much in supporting roles throughout. Finally we end the programme with one of the latest arrangements in our repertoire, selections from Tchaikovsky’s Swan Lake. Some passages are incredibly challenging, and I find the Finale particularly difficult to execute at the end of a long programme. Having heard seven musicians on stage striving to master the most difficult music, the audience rewarded us with a standing ovation and we in turn treated them to a pair of classic encores from our back catalogue. All-in-all it was a very rewarding journey!

As I put the finishing touches on this blog we’ve all dispersed to different airports and train stations to rush back to our various ‘day jobs’. We’ll next see each other in November for a week recording yet another volume of ‘Music for Brass Septet’ with Naxos. I think we’re all particularly excited about the American repertoire, having performed the Gershwin countless times around the world in the last two years. In the meantime I’m hoping the travel gods are kind to me and my trombone, and I am able to catch my connecting flight in Vienna, allowing me to arrive in London in time for my evening show at Her Majesty’s Theatre. Fingers and toes are firmly crossed.