A leisurely 10 am start in Christchurch continued the theme of this being the most relaxed Septura tour in history. To Matt Gee’s chagrin, a couple of us even committed the cardinal sin of being slightly late for the bus – it seems that Kiwi baristas are quite laid back, and the making of the perfect flat white definitely cannot be rushed. We were relieved to see that for the short flight down to Dunedin we were on a slightly bigger plane than the day before, so at least the tenor trombones could be squeezed into overhead lockers.

Ahead of the tour I had done an interview with the Otago Daily Times and whilst most of the article seemed to really capture the essence of Septura, we were amused to read in the published version that Pete Smith – in reality Principal Tuba of the Philharmonia Orchestra – had been given a considerable upgrade, and was credited with holding that position in the Royal Philharmonic. 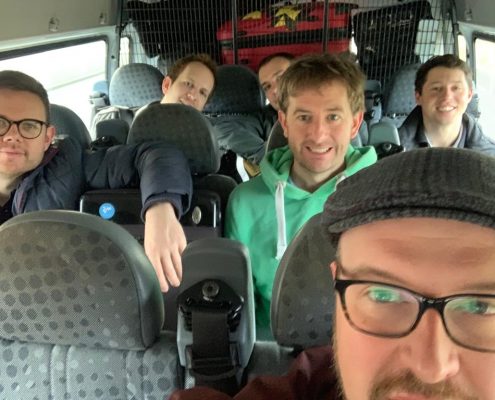 On the battle bus to Dunedin

We had been told that Christchurch was the “English” city of New Zealand (we were staying on Regent Street there), and that Dunedin was the “Scottish”. It certainly seemed that way as we arrived. After flying past stunning mountainous landscapes we descended through thick clouds and landed in pouring rain, a stark contrast to the beautiful sunny weather that we have experienced everywhere else on this tour. As we were driven to our hotel in the centre of town several of the players remarked on how much it reminded them of Glasgow – two, Huw Morgan and Matt Gee, having actually lived in the Scottish city early on in their careers. 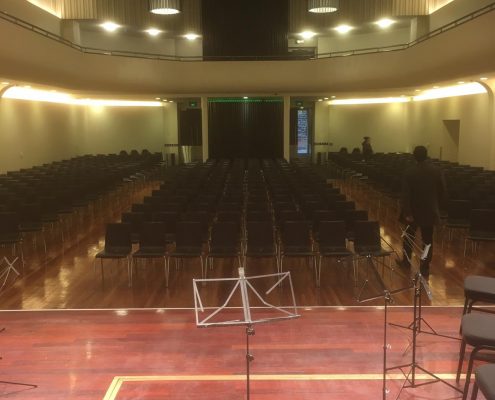 After a healthy lunch all together we had a bit of a rest before heading to the Glenroy Auditorium for our brief soundcheck. Now that we have performed both programmes in New Zealand we try not to rehearse too much before the concert, preferring to keep our lips fresh in the knowledge that the music is all extremely well-practiced already. We were slightly relieved to find the auditorium was a good-sized chamber hall, seating around 500 – rumour had spread (from our knowledgable taxi driver Starsky) that the hall was a 5000-seater, and despite the press coverage we weren’t fully confident of filling a hall that size.

As it turned out we performed our Pilfered Piano programmes to a respectable audience, and it was warmly received with enthusiastic and frequent applause. We always try to go out to the front of house in the interval and at the end of the concert, and it was nice to meet some of the audience and sign CDs for the keenest of them.

Work done for the day we decided to sample some of the pinot noir for which the Otago region is famed, and we retired to our hotel (via a Scottish-inspired kebab shop) content with another great day on tour.