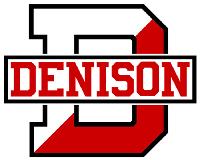 We’ve now reached the mid point of the tour, we’re all still in great shape and team morale is higher than ever. All downhill from here!

You may have noticed our rather arduous travel schedule, not to mention 10 shows in 10 days. However, sharing the driving and navigating, and plenty of laughs with a great bunch of pals has made the journeys pass in no time! 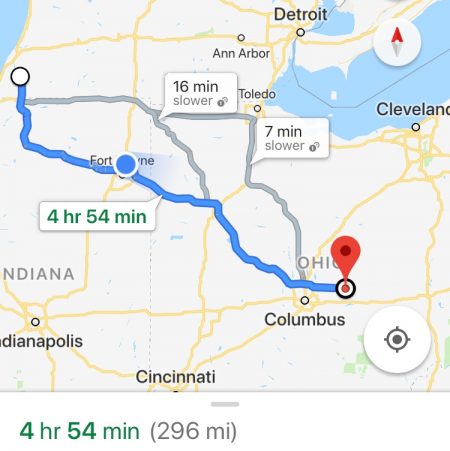 This morning we were spoilt by a seemingly late departure time of 9am. After a bit of FaceTiming to our long-suffering loved ones, we set off on the icy road to Granville, Ohio.

Usually we don’t plan our pitstops, but today we had 2 planned visits on route. First mission was to exchange our trusty tourbus MKII and transfer all our gear to a new identical one, at Budget Rental, South Bend International Airport. Needless to say, we now have loading and unloading off to a fine art so the swap over was exceedingly speedy! 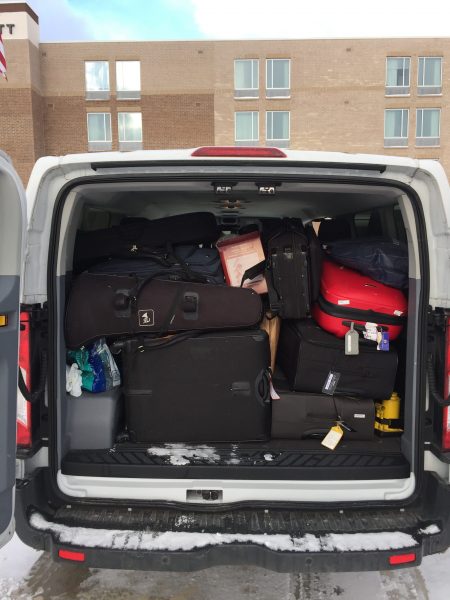 Huw was more than happy with his new ‘hole’ and even reckoned tourbus MKIII gained him an extra inch of leg room! 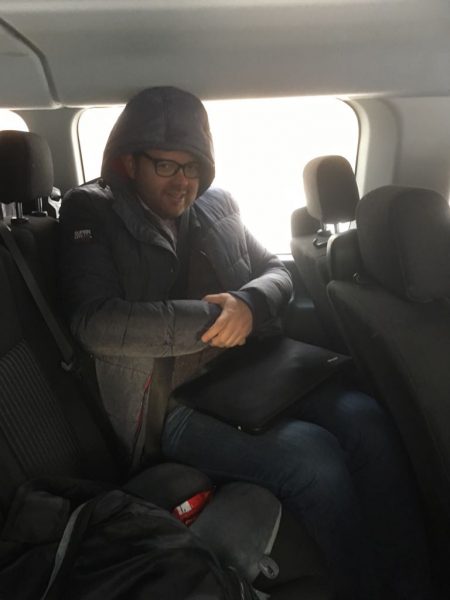 Huw in “the hole” MKIII

Once packed up, our next stop was the Conn/Selmer Vincent Bach factory, in Elkhart, Indiana. We were kindly invited by a member of our audience last night who worked making Bach bells. He’d brought his brass playing son to watch our concert. Unfortunately none of us thought to get his name… 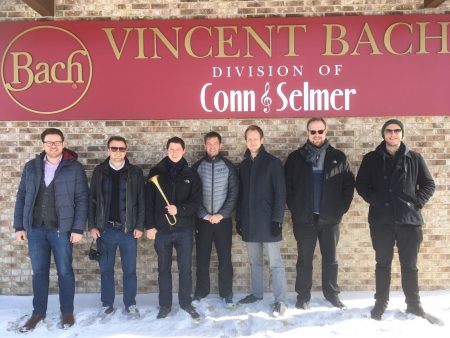 Septura outside the Bach factory in Elkhart, Illinois

On arrival the incredibly helpful staff at the Conn/Selmer Corporate reception were eventually able to ascertain our mystery audience member was called Rudi. Unfortunately he was on his lunch break so rather than waiting, a rather jolly Phil Brown, Category Manager, Low Brass, gave us a very insightful tour of the factory. 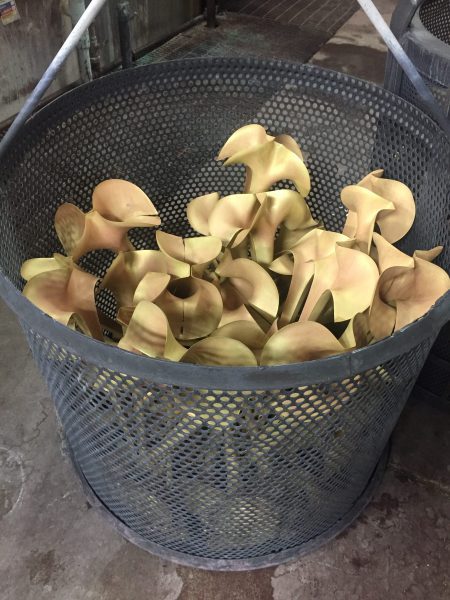 Trombone bells in the making 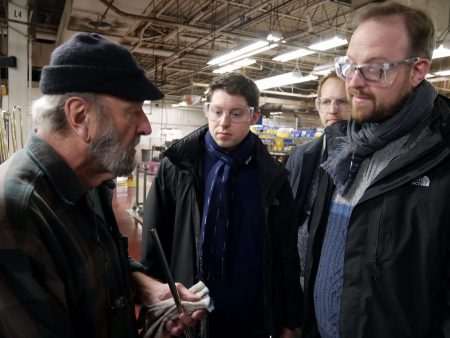 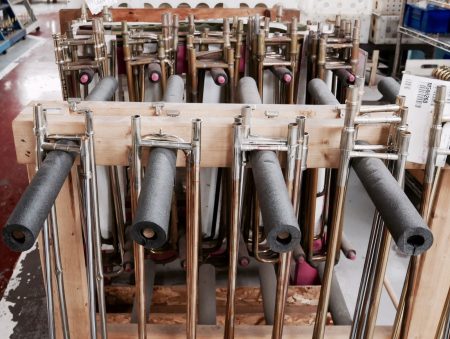 The trombone slides made today 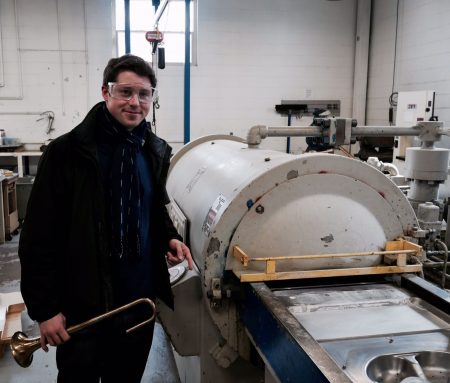 This machine shapes the bells (and formerly made artillery shells) 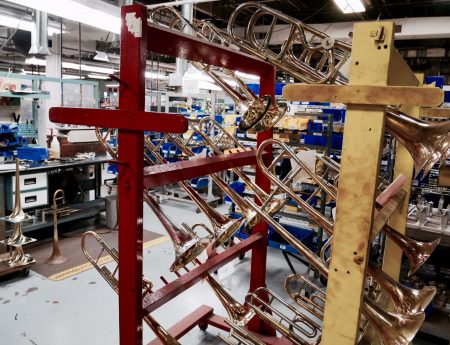 This was incredibly interesting, however when a rather clumsy Matt Knight had an accident with a newly handcrafted trumpet bell, we were soon sent packing… As for Rudi, we never did get to see if this was actually our man! 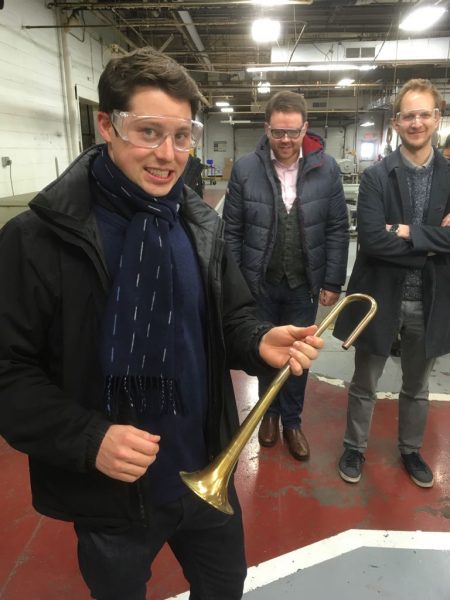 The ruined trumpet bell…a souvenir of our visit

Tonight’s venue, the Burke Recital Hall, Denison University was designed by Alvar Aalto, the same architect as the famous Finlandia Hall in Helsinki (former home to Simon Cox in his days as a trumpeter in the Helsinki Philharmonic). A good acoustic can often act as an 8th player, and this hall didn’t disappoint, with a perfect acoustic for brass chamber music. 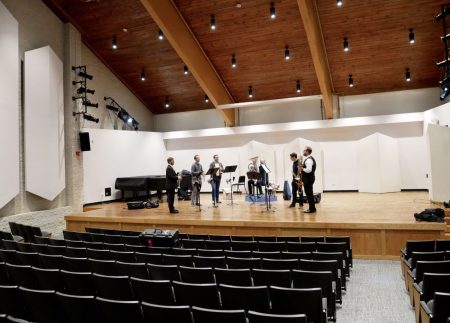 The auditorium at Denison University

Now our American in Paris programme is well established, we’re now using our sound checks to rehearse programmes for concerts in Ilkley and Royal Welsh College of Music and Drama on our return, 14 and 16 Feb respectively. Running through Parsons’ Ave Maria 45 mins before curtain up came as a refreshing change and showed the true versatility of Septura. 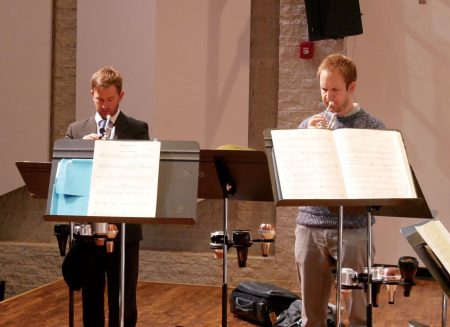 After much beavering away on their laptops by our in-house arrangers, Simon Cox and Matt Knight, the rest of us have now been issued with our parts for Pictures an an Exhibition for Kleptomania 2 (St John Smith Square 20th February and Cambridge Sunday 25th Feb). Needless to say hearing the odd extract of Mussorgsky’s piano masterpiece during Septura’s daily warm up routines is becoming more frequent. Ever the professionals! 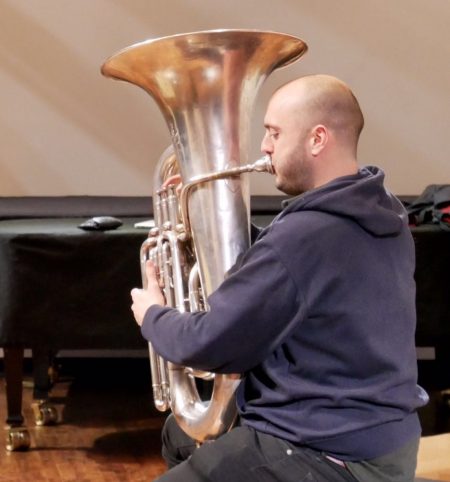 So to the concert, after a pre-show snack of crudités and dips (requested by us in an update of our rider as we’re really missing vegetables!!) we performed our first half of Ravel and Debussy with customary aplomb and found time to mix with our audience in the interval both by the CD stall and some of the less mobile in the auditorium.

The lighter second half of Gershwin sent the audience off with a spring in their step and after a quick warm down we were treated to some food and beverages by our hosts, band director Chris Westover and composition teacher and assistant director HyeKyung Lee, in a local ‘Pub’ in picturesque Granville.

A brief snowball fight on the way home and tomorrow a much needed lie in the beautiful Granville Inn. Departure time tomorrow, midday! 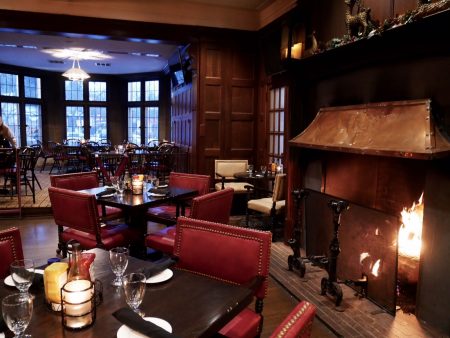