On our final day in Nelson we were up bright and early for another rehearsal, this time for our upcoming recording of Tchaikovsky’s Nutcracker. It says a lot about how busy Septura’s members are in their orchestral ‘day jobs’ that the only time we could get everyone together to do this was on the other side of the world. The effects of the brutal jet lag (caused by an 11-hour time difference) are still being felt in some quarters, but we still managed a productive session, observed by the residency students. We’ve performed this piece several times in recent years, so are really looking forward to recording it and giving a wider audience the opportunity to hear it.

Lunchtime saw the culmination of all of the work we’ve done with the students during our residency here, as they took to the stage in their pre-formed chamber ensembles for a final performance. It was great to see them putting into practice what they’ve learnt, and how supportive they all were of each other. The concert finished with a performance of Richard Strauss’s Feierlicher Einzug, in which all the students and members of Septura joined together in a rousing finale. With so many brass players in a relatively small hall, we had to be careful not to overdo the volume. Luckily our conductor Matt Knight quickly mastered ‘the hand’ – a gesture familiar to brass players around the world, meaning it’s time to dampen your enthusiasm. 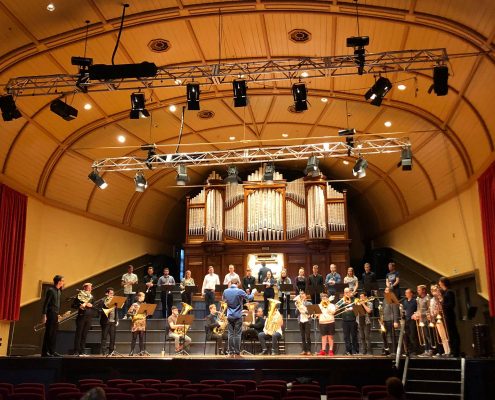 Matt Knight rehearsing the whole company in some Strauss

We were given the difficult task of awarding scholarships to three students, allowing them to buy equipment to help further their studies. From a very strong field we chose Jackson Bankovic (trombone), Sophie Spencer (trumpet) and Toby Pringle (trumpet), three talented and hard-working students who surely have bright futures ahead of them.

Perhaps one of the most valuable aspects of a course like this is the chance for students and teachers to chat informally about much broader issues than just music making – it’s hopefully an enriching experience for the students to be able to ask us about anything that pops into their heads, and certainly an interesting one for us.  It was decided the most suitable venue for this was a local freehouse, and as the afternoon turned to evening we enjoyed discussing all manner of topics, from the best places to study abroad (the Royal Academy if Music, naturally), to whether Wales might finally beat the All Blacks at this year’s Rugby World Cup 🤞🏻

Our number one fan Tadao had become something of a mascot for the course by this point, so it was a source of great delight when he was persuaded to perform a set with his Ukulele, including passionate renditions of Yesterday and Danny Boy. Cries of T-Bone (his affectionate nickname) rang out around the town as he drew to a close (to get a sense of the volume, think of the roars accompanying Tiger Woods around Augusta during the latter stages of his recent Masters triumph).

It became apparent at this point that non-liquid sustenance was required, and that the Little India restaurant was our only option – given that curry is generally the dish of choice for most brass players, this seemed like an appropriate way to round things off.  The students’ education continued as a chilli eating contest ensued – they might be talented but as Dan West demonstrated there’s just no substitute for experience.