The morning after our New Zealand debut was gloriously sunny – any fuzzyness from a rather short night’s sleep quickly cleared; Pete was even heard whistling in the shower such was his happy outlook.

Group warm-ups kicked the day off at 8am – Matt and Dan gave away their playing secrets, and reduced everyone to fits of laughter with some very amusing brain-gym games, while Huw demonstrated a warm-up that would frighten even the hardiest of pros! 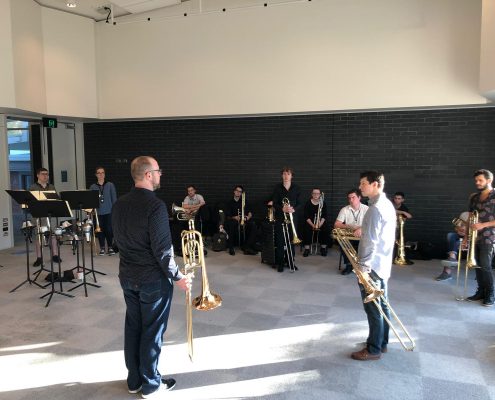 It was time for us to down instruments, pick up our batons, and prepare the students for a lunchtime concert at Nelson’s Christ Church Cathedral. The repertoire focused entirely on Gabrieli, which, as all brass players will testify, is notoriously tricky – one wrong move, a missed 6/4 bar or an ill prepared tempo change could bring the entire piece to its knees. The students did a fantastic job however, filling the cathedral with warm, majestic sounds to a large and appreciative audience.

We had a half hour break during which refreshments were taken with our Japanese super-fan, Tadao. Over the last few years he has followed the Septet all over the world. He’s been to London to watch us play, Germany, Wales, Finland and now NZ. It’s safe to say that he is more than a little excited about the group visiting Japan later this year. 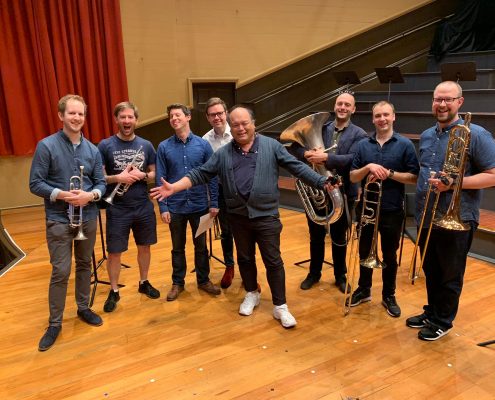 Refreshed, Matt and I dashed off to run a trombone workshop, while Dan gave the only bass trombone player on the course a two hour grilling on Respighi’s Fountains of Rome – his chops may well have been shot, but he spent the rest of the day enthused about Dan’s teaching and everything trombone-related.

The workshop allowed students to perform a wide range of music, from orchestral excerpts to solo pieces. Matt Knight’s singing turned out to be a particular highlight as he got wildly carried away demonstrating the supporting vocal part in Tuba Mirum from Mozart’s Requiem. 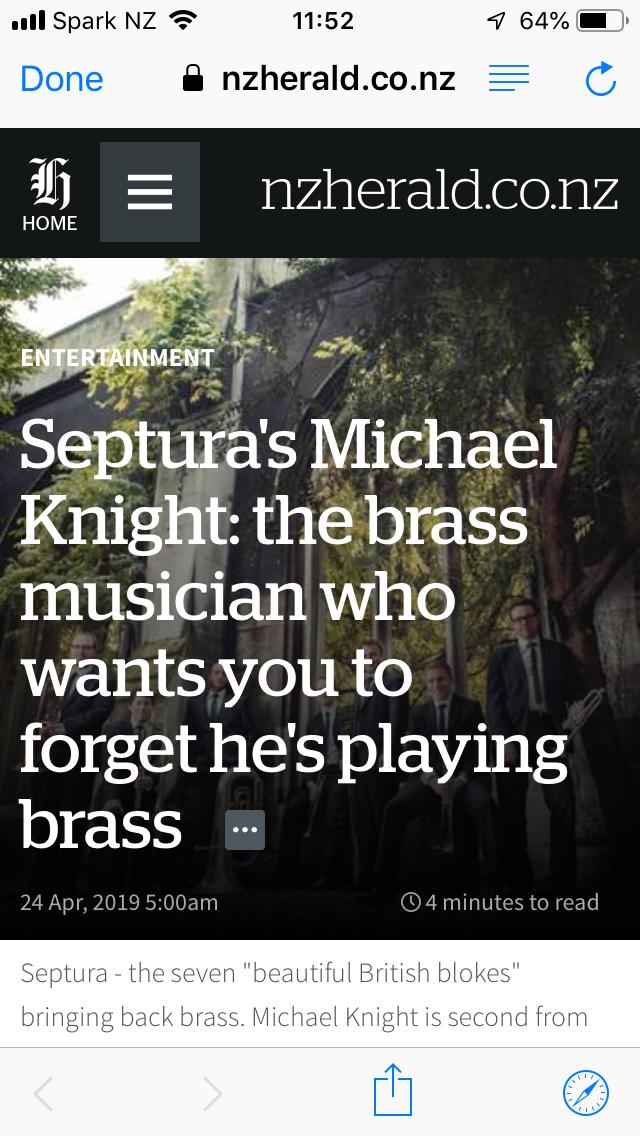 It was a special day for Matt, because an article about the group was being published in the popular New Zealand Herald. Matt had been interviewed over the phone a few weeks before, but unfortunately something got lost over the airwaves – Septura’s ‘Michael Knight is not the least bit sniffy about brass bands’ the article claimed! We immidiately went to work mocking him, photoshopping all manner of Knight Rider pictures, replacing David Hasselhoff’s face with Matt’s… this may go on for a while! 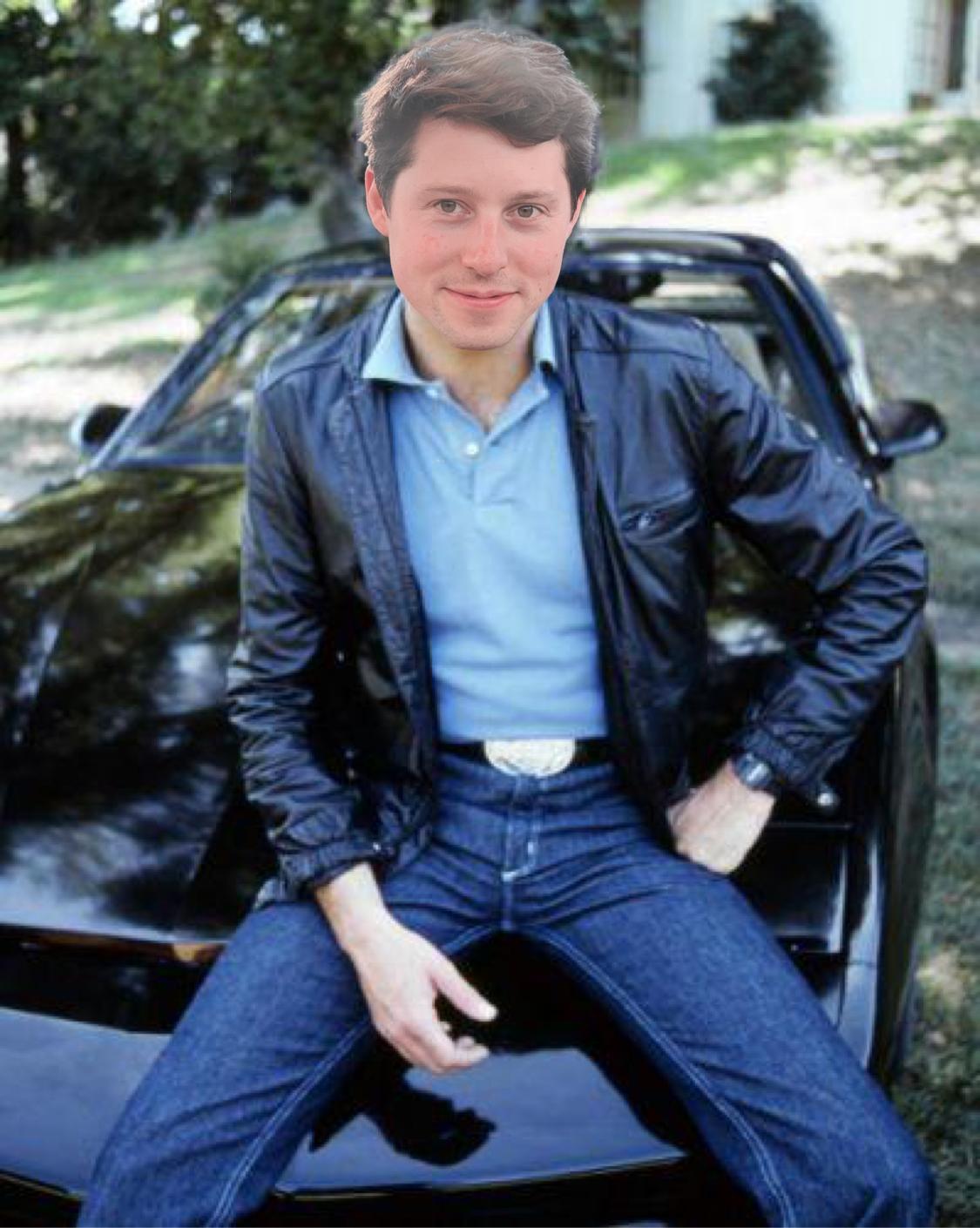 More chamber coaching followed, with some last minute tweaks before the following day’s concert. Dan and I had been released from our coaching duties, and took a well-earned coffee in the sun before heading back to watch the other guys in action.

We popped into a restaurant for a bite to eat and as luck would have it had the most fantastastic meal: flat iron steaks washed down with a great local bottle of Pinot noir. Matt and Simon unfortunately had to miss this meal and deliver a talk on stylistic considerations in brass chamber music (we kept reminding them how good it was), before we all came together for a panel discussion led by Dave Bremner, the course curator and principal trombone of the New Zealand Symphony Orchestra. A few crates of beer appeared which set just the right tone for this Q & A session, which very naturally concluded in the pub.