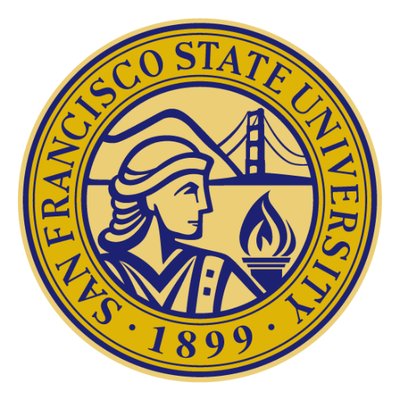 It was hard to believe the last day of our tour had arrived – it had seemed so far away almost three weeks ago as we touched down in Atlanta. Since then we’ve zigzagged across this huge country, performed 12 concerts (with one cancellation), and encountered heavy snow, torrential rain, warm sunshine and (almost) tornadoes.

We always get told by people we meet how wonderful it must be to do something we love for a living, and that’s certainly true a lot of the time. It’s difficult to think of a much better job than one that allows you to travel to places like San Francisco, and perform great music with talented colleagues while you’re there. There are downsides though, and staying in 13 different hotels in 13 nights with a whole load of driving and flying in between isn’t quite as glamorous as it might sound. So despite having a great time, as the final day dawned we were all ready to head home.

Our venue for the day was San Francisco State University, and a matinee concert was to be preceded by classes with trumpet and trombone students, both from SFSU and San Francisco Conservatory. Alan, Huw and Gee seemed perfectly suited to this, so we sent them off bright and early to impart their wisdom while the rest of us continued to digest the sensational Nepalese curry of the night before. Who knew that buffalo wings and butter chicken were such natural bedfellows?

Soon enough we joined our harder-working colleagues for the concert. The McKenna Theatre felt slightly odd to play in at first – it’s essentially a theatre stage but with recital-hall-style seating – so we had to spend a bit of time during the soundcheck making sure we were in the optimal position to get the best out of the acoustic. A bit of local knowledge helped us to figure things out, and we were happy with the results in the end. Matt Knight and I were subsequently whisked off to take part in a pre-concert talk with our hosts Cyrus Ginwala and Brad Hogarth, with a number of interesting questions emerging from the audience, highlights including “will your work be impacted by Brexit?” (You tell us? Probably) and what our thoughts were on free jazz in chamber music contexts (I deferred to our resident expert Knighty for this one).

There was a palpable sense of anticipation at getting to the finish line, and the large and enthusiastic audience made it the perfect finish to the tour. As ever, the Clara Schumann went down especially well, and we’re delighted with this new addition to our repertoire.

Afterwards I had a particularly interesting discussion with a local musicologist who was there to review the concert, about our approach to repertoire development – she was keen to understand why we have focussed on transcriptions so far, rather than commissioning living composers which she felt should be more of a priority. As I explained to her, our opinion in Septura is that the long-term health of the brass septet as a classical medium is best served by building a large counterfactual history of repertoire, allowing us to bring our music making to the widest possible audience rather than operating solely within the relatively narrow (albeit important) field of exclusively contemporary music. We intend to build on that foundation by commissioning the great living composers of our age to pen significant works for brass septet, ensuring its long term future as a serious artistic medium. The emphasis should be on quality over quantity, and we will take our time to make sure the results are what they should be.

All packed up, it was back into tour mode for our final journey. Smooth check in, quick burger in the airport, bit of attempted sleep in the hideously outdated British Airways cabin, and before we knew it we were back, reunited with wives, girlfriends, sons, daughters, and a particularly excited maltipoo puppy. We have a couple of days to recover before it’s back to it, performing in the Wigmore Hall for the first time on Thursday, and the Chilterns Arts Festival on Friday. It’s been quite a month!