No sooner had we touched down on British soil following our successful tour to the US, we were straight back together the following evening rehearsing for four concerts we have coming up during the next two weeks back in good old Blighty.

Slightly bleary eyed and with a minor personnel change (Peter Moore in for Matt Gee), we set to work on the brand new Pictures at an Exhibition for brass septet. This is programmed in our next KLEPTOMANIA concert ‘Pilfered Piano’ at St John Smith’s Square in London on the 20th February, and West Road Concert Hall in Cambridge on the 25th. It’s important to mention that this arrangement is conceived from Mussorgsky’s original solo piano composition, not the more famous orchestration by Ravel. There are already several arrangements of this work for brass (most notably Elgar Howarth’s epic arrangement for symphonic 16-piece ensemble), however Septura’s version will be completely different – head to kleptomania.septura.org to get your tickets!

Keep an eye on your valuables

After a Septura day off (during which Pete Smith and myself were rehearsing Mahler 5 in two different London orchestras, and Matt Gee was diligently practicing for a double concerto with Dame Evelyn Glennie no less – 17th February 7.30pm Dora Skoutzker Hall, Cardiff), we were all heading north for a recital at Ilkley Concert Club in the beautifully ornate Kings Hall, Ilkley. 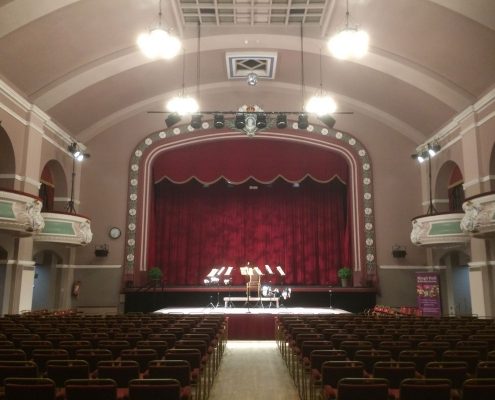 The Kings Hall in Ilkley

Welcomed with a piping hot cup of Yorkshire tea, this was the first outing of our ‘Bridging la Manche’ programme, exploring the compositional differences between Britain and its closest European neighbour.

We were informed that the Ilkley Concert Club has a membership of around 475, and is so oversubscribed there is actually a waiting list! Despite Yorkshire having such a rich brass heritage, we were privileged to be the first brass chamber group to perform in this well-established series.

To a full house, the first outing of this programme was incredibly well received. It was a pleasure to meet such a wide spectrum of subscribers in the interval. Young budding brass players, string players, local music teachers and non-music playing concert goers who simply enjoy top class classical music in their home town.

Following rapturous applause we treated them all to an encore of the exhilarating second movement of Shostakovich’s 8th String Quartet. After we released a very popular YouTube clip of us recording this it has become quite a calling card for the group. Needless to say, following the concert we were soon sold out of the our Naxos Russian disc, Music for Brass Septet 3. Organisations like Ilkley Concert Club rely on the generosity of their members to continue their good work, and we were very grateful to our wonderful hosts for putting us up overnight – the drive back to London would have been a bit far! 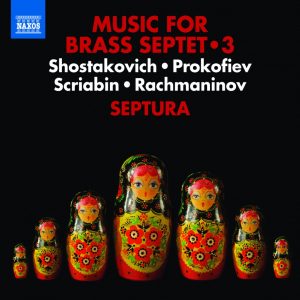 One of our stranger photoshoots

KLEPTOMANIA: behind the scenes
Scroll to top
X
X