Today our long awaited residency in Nelson begins. Over the next four days  we’ll give a performance of our Pilfered Piano programme, coach various young chamber groups, conduct a concert of Gabrieli in the Cathedral and combine together with the students in the final concert in a big Strauss finale. 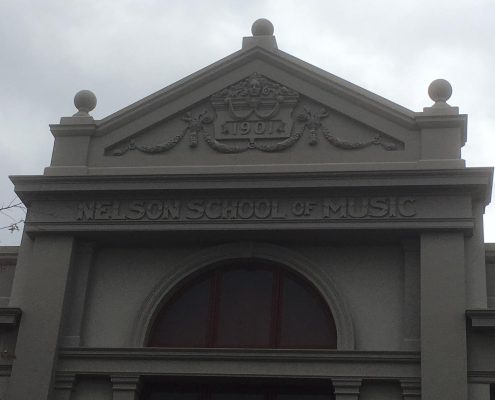 The Nelson School of Music

After doing our individual daily warm up routines we gathered in the main hall for welcomes and introductions by our affable host and friend David Bremner, who is also Principal Trombone of the New Zealand Symphony Orchestra. 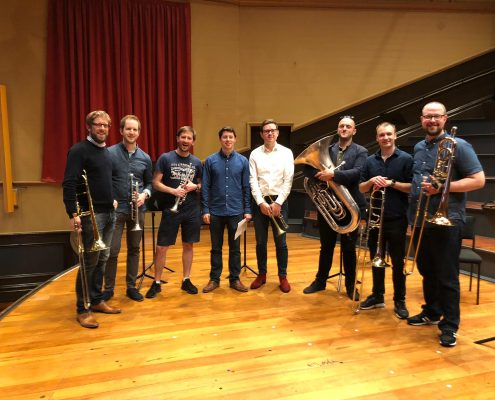 Septura with our fantastic host from the NZSO, David Bremner

The students have arrived in already established chamber music ensembles from all over New Zealand and two from Brisbane and Melbourne, Australia. After an outline of the course from David and some housekeeping from Rachel, our Chamber Music New Zealand host, we were able to mingle over a rather generous buffet lunch in the very plush, newly refurbished foyer of the Centre of Musical Arts.

The afternoon saw the first of 3 allocated chamber music coaching sessions. The forces of Septura divided up into different rooms, quirkily named after legendary brass players for the week, such as Maynard Ferguson, Wynton Marsalis, Arnold Jacobs and Alison Balsom. I was able to float between rooms to see how my colleagues were getting on and help to choose a group to receive the honour to warm up the audience prior to our performance tomorrow night. 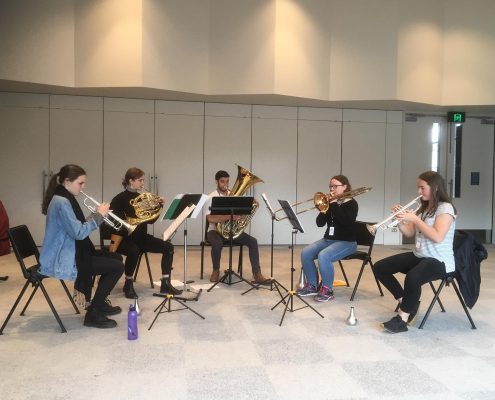 It was apparent the standard was incredibly high and the level of preparation by the groups was to be commended. It was also refreshing to hear new music and varied ensembles, including ‘Brass Quad’, an ensemble consisting of 2 trumpets trombone and euphonium, playing all of their own arrangements.

This was followed by the first of the daily ‘Geeky Brass Stuff’ sessions in which a different ‘no holes barred’ topic is discussed each day. Today’s was ‘mouthpieces’ which generated some interesting discussions, especially from our resident expert Huw Morgan.

To finish the day, it was time for Septura to put all our wise coaching words into practice in our own rehearsal for our 5 Chamber Music New Zealand performances.

Having focused on Mussorgsky’s Pictures at an Exhibition the previous day, this was a chance to reacquaint ourselves with our American in Paris programme. Although we have now played this many times, one of the joys of brass chamber music is how these works evolve and improve over time. For me the enjoyment of this programme increases in every airing. Coming back to something afresh often means getting the rubber out on old pencil markings and trying new ideas and learning from previous performances.

On the theme of reacquainting, it is great for us to have our very own super-fan Tadao from Japan observing the whole course, armed as always with his camera and iPad hanging around his neck. Tadao is adding to his ever increasing portfolio of Septura visits including Finland, Germany and London, documenting his trip with pictures of local landmarks and various cuisines on Facebook to his merry band of followers back home.

It’s not long until we return the favour and join Tadao’s own Tokyo Brass in our forthcoming trip to Japan in June!