The final concert day of a Septura tour (or ‘SepTOURa’ – a cringe-inducing term which I unsuccessfully tried to moniker earlier this week) is always bittersweet. It’s fun performing and socialising with great friends in a new and exciting country, but by the final day I find the desire to get home and reunite with my long-suffering wife and kids to be a bit heart-wrenching. Luckily today began with the welcome distraction of riding on the 320km/h Shinkansen ‘bullet train’, as Kyoto – the final destination of Septura’s debut Japanese tour – beckoned. Alarms were set for a civilised 11am departure, and I hoped that I would not be awoken by another alarmingly punctual 8am magnitude-5 earthquake, as I had the previous morning on the 11th floor of the Tokyo Metropolitan Hotel! 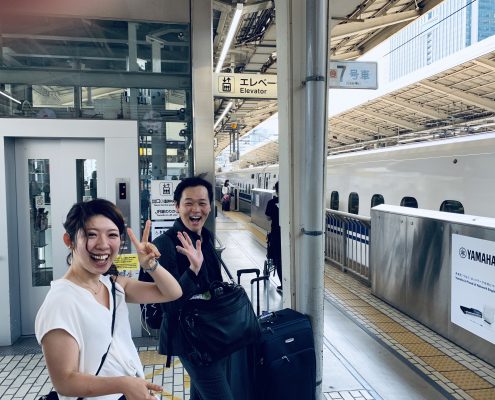 We were greeted in the hotel lobby by our minders for the day, sent by the promotors Pro Arte Musicae to herd us through Tokyo’s Metro system to the bustling Shinkansen terminal in the heart of the city. After several journeys this week navigating the Metro with cases and instruments I believe all of us were excited to get to a slightly smaller city. Kyoto only has 1.5 million residents – significantly smaller than the densely populated Tokyo, which is home to over 9 million people. 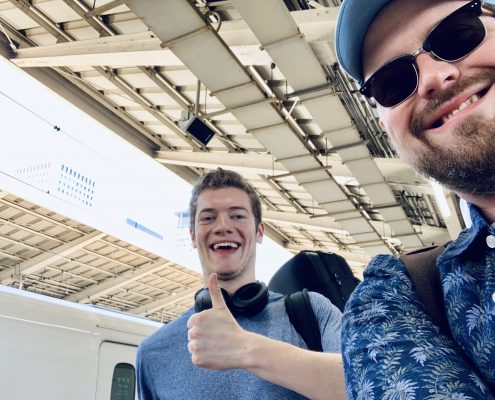 Pete couldn’t hide his excitement as we waited to board, and he informed us that the Nozomi class bullet train for our journey was the fastest of the three classes of Shinkansen commissioned for the Japanese rail network. I shot a few time lapse videos for my train aficionado friends back home (4-year-old son, 2-year-old daughter and 76-year-old father-in-law included) but soon found that the scenery began speeding by at such a quick pace that normal video would do just fine!

It is widely acknowledged that these trains run as smoothly as they do fast, and our Nozomi didn’t disappoint. Spacious coaches, even in our standard class carriage, gave us plenty of room to address the various tasks we needed to complete on this journey: Simon scoured the Charles Ives archives for music which would suitably contrast Gershwin in our upcoming American-themed recording; Matt proofread and published blog posts and social media content; Pete studied recordings for an upcoming solo gig back in the UK; Sasha, Alan and Huw caught some shut-eye and I obviously wrote the bulk of this blog – which I promised the lads wouldn’t descend into a quasi-political rant about why we can’t have such nice trains in the UK! Perhaps one day we’ll have a transport infrastructure that’s as sophisticated and efficient as the Japanese. We can always dream! We disembarked and admired the sleek contours of the Nozomi as it sailed swiftly to its next destination. As you may notice in the accompanying photo, the train’s aesthetic nicely matches the contours of my brand new Japanese-made DAC bass trombone case. Another sterling example of Japanese engineering at its finest! 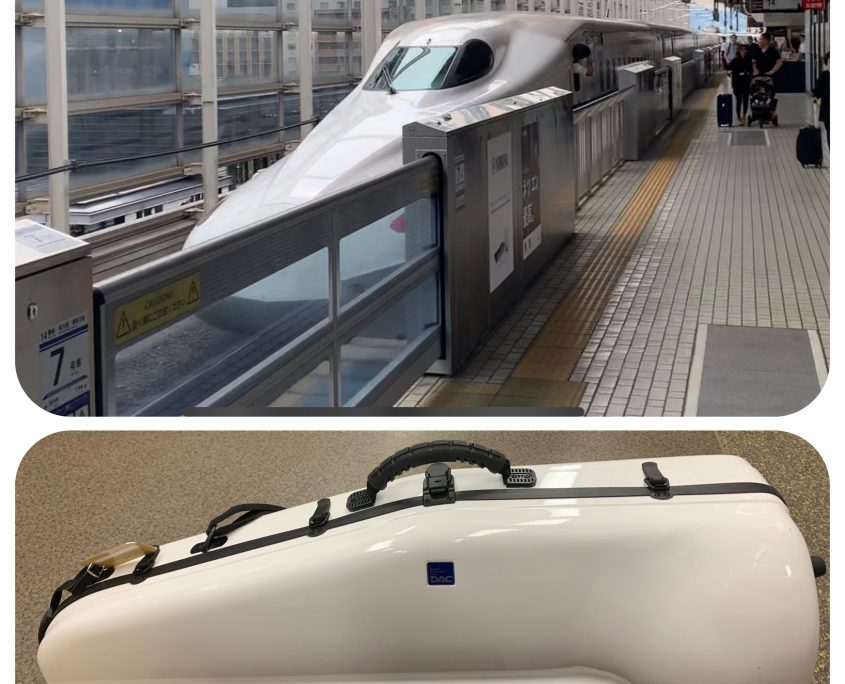 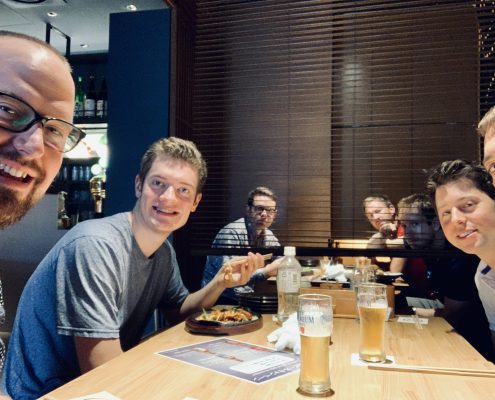 After a segregated lunch (the trumpets wanted to chat about mouthpieces or something) we had a quick turnaround before another signature Septura schlep on public transport (SCHLEPtura is another nickname I’ve suggested for the group) to the venue. It’s not always Ubers and limousine buses for us! 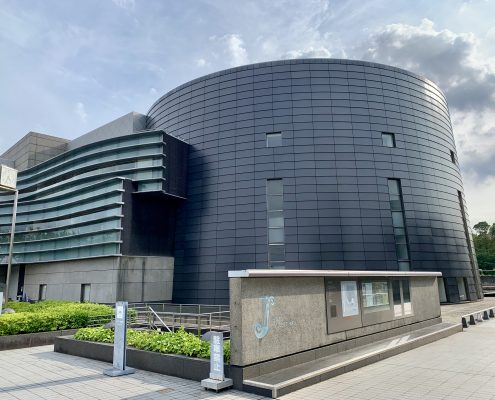 We arrived at the venue for tonight’s sold out gig, the Murata stage at the Kyoto Concert Hall, and found another stunning, modern performance space with a rich acoustic for us to enjoy. I could rant about the lack of similar spaces in London but I’m afraid it would be nothing that hasn’t been said before! 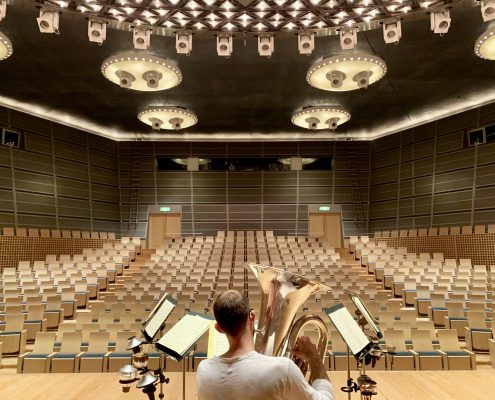 Playing for a packed-out concert hall brings out all the adrenaline and the first half proved to be very exciting! The overture, Finzi’s God Is Gone Up is anthemic and, to my ear at least, sounds about as British as it gets. Elgar’s Serenade for Strings is a staple of our repertoire these days, as is the challenging but profoundly moving Shostakovich 8th String Quartet – though neither of these pieces have made us particularly popular with our various string-playing friends and colleagues. I came off stage in the interval to FaceTime my kids and realised just how knackered I was. We went back on for the second half with renewed focus and determination, and despite the cumulative effects of several intensely demanding concerts in a row, everyone performed the Handel and Gershwin with an impressive reservoir of energy. My admiration for the musicians who I get to share the stage with in this group reaches stratospheric heights when I witness what they can accomplish musically under these demanding conditions. 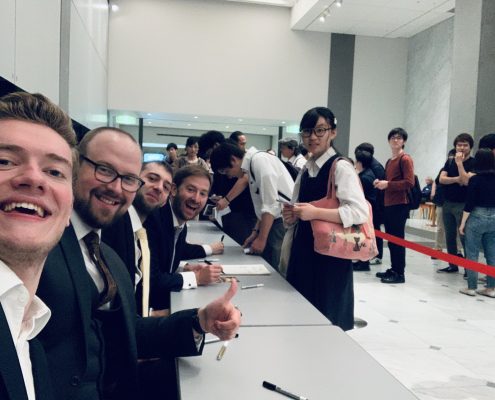 After the concert we had another marathon autograph session – a ritual I’m still finding quite surreal. Audience members of all ages, including many brass players and aficionados, formed an orderly queue while the group sat along a table armed with Sharpies and smiles for selfies. Most of these delightful people have brought us their newly-bought Septura CDs or a concert programme to be signed. Many of the younger crowd presented us with more unusual items upon which we were expected to scribble our ever evolving signatures: etude books (I didn’t realise there were so many volumes of Kopprasch), instrument cases and even the odd mobile phone for us to sign. After a few photos with the keenest of the young brass players and school kids we packed up our gear for the last time as quickly as we could.

We joined some members of the local Kyoto brass ensemble for sushi, beers and some very crunchy deep-fried bits of chicken bones (mmmmm…) at a local restaurant and then we finished the night with a ‘cap de nuit’ (or two… or three) whilst playing some surprisingly competitive and spirited darts over the road. Alarms dutifully set for a 6:50am start the next morning we caught a couple of hours of sleep and prepared to schlep it back to London.