After the festivities of the previous evening, the second day of our residency began with Matt Gee bravely volunteering to lead the 8am group warm-up class. Rather unsurprisingly for such an early morning session, the attendance of Septura’s other members – which had been enthusiastically mooted some twelve hours earlier – failed to materialise, as many enjoyed the opportunity of an extra hour in bed, a leisurely breakfast, or an early morning run. 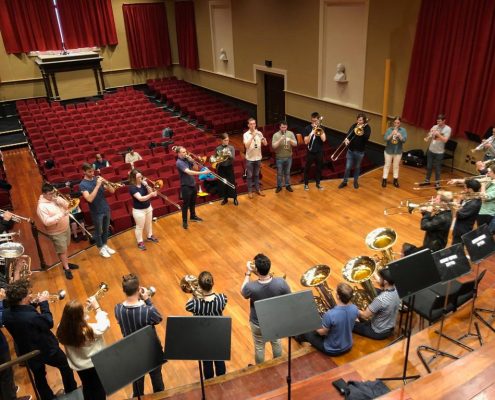 Shortly afterwards, it was straight into another intensive couple of hours of chamber music coaching. I had the pleasure of working with a very talented high school trumpet quartet from Christchurch, as well as an advanced student trombone quartet, who performed a beautiful arrangement of Debussy’s Trois Chansons. It’s tremendously enjoyable for us all to work with such enthusiastic and dedicated participants, and especially since they are so receptive
to our suggestions.
Among the highlights of this Chamber Music New Zealand residency has been the daily ‘Geeky Brass Stuff’ (or GBS) sessions, which allow the students and players to discuss a variety of topics. Since some of Monday’s questions had been clearly sabotaged by fellow Septura players, course artistic director and New Zealand Symphony Orchestra principal trombonist Dave Bremner’s deft moderation ensured that Tuesday’s Q&A ran rather more smoothly, with an emphasis on ‘overseas study’. 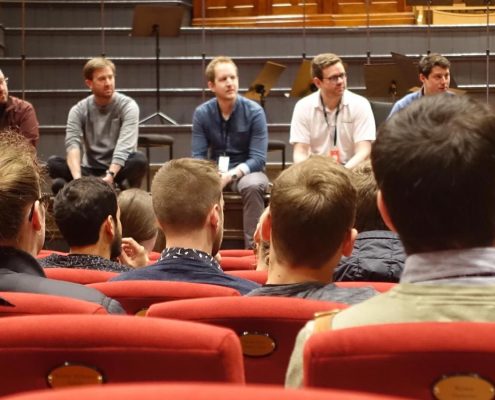 Most unusually for Septura, we also welcomed a horn player into our midst as a guest professor for Tuesday’s classes. Alien as this species might be to us, the face was a familiar one – Sam Jacobs, who, after a period as principal horn in the Royal Philharmonic Orchestra (alongside Matt Gee and Matt Knight), is now the section leader of the NZSO. Sam’s job, of course, was to lead the french horn masterclass, and we’re looking forward to seeing him again during our visit to Wellington later in the tour.
The first session of the afternoon also allowed some of our members to demonstrate their burgeoning conducting skills, as we rehearsed several brass ensemble works for Wednesday’s lunchtime concert, which will be dedicated to the music of the great sixteenth-century Venetian composer, Giovanni Gabrieli. Techniques were varied – from tautly rhythmic, baton-like pencil methods to flailing histrionics reminiscent of dodgy choral society conductors, we ensured our students would never be surprised or disappointed by anything they may encounter as a professional musician!
Tuesday night also marked the opening concert of our tour. A large and appreciative audience at the Nelson Centre of Musical Arts, who were also treated to an informative pre-concert talk by Simon and Matt Knight, greeted our ‘Pilfered Piano’ programme – containing works by Rachmaninov, Debussy, and Mussorgsky’s epic Pictures at an Exhibition – with rapturous applause. 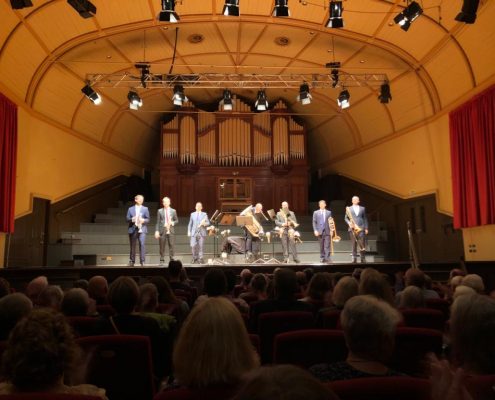 Septura in concert for the first time in the Southern Hemisphere

The post-concert debrief was once again conducted in a local hostelry, which afforded us the opportunity of chatting with our CMNZ friends over a pint or two of New Zealand’s finest craft ales. While those of us involved in Wednesday’s ‘red-eye’ warm-up class soon headed to bed, the remainder continued to avail themselves of our Kiwi hosts’ first-class hospitality, as the party headed into the early hours with no sign of slowing down!
http://septura.org/wp-content/uploads/2019/04/72f6eea6-a7c5-4db3-9afa-1cba73b7e137.jpg 900 1600 Matthew Knight http://live.septura.org/wp-content/uploads/2017/11/new-logo-MK5-300x102.jpg Matthew Knight2019-04-25 21:38:272019-04-25 21:45:00Nelson residency Day 2 (by Huw Morgan)
Nelson residency Day 1 (by Alan Thomas)