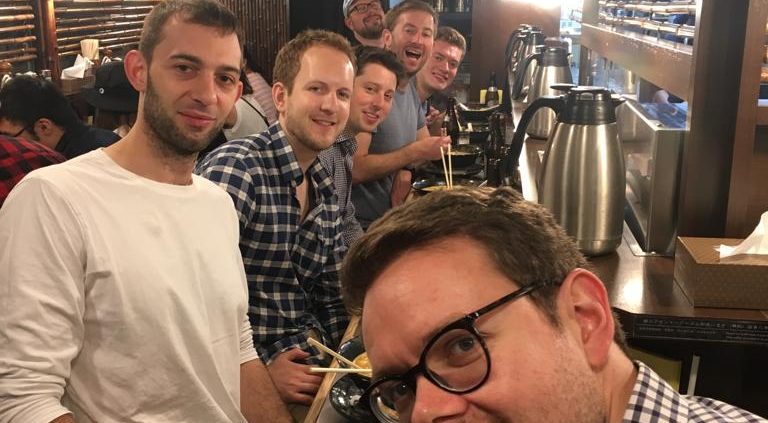 Monday morning began rather unconventionally, with a brief tremor measuring 5.2 on the Richter scale acting as my 8am wake-up call! Fortunately we were some 100km southwest of the epicentre (near Mito, where we had performed the previous day…), so there were no pictures falling off the walls or tables sliding around the room, although judging by the number of members who slept blissfully through the earthquake, I’m not even sure such drama would have awoken them from their slumber! I’ll leave it to you, dear reader, to decide whether we are simply a very talented bunch of sleepers, or whether some may have been suffering the effects of the evening before!

Having caught up on some much needed rest, our free morning gave us the opportunity to undertake a spot of light exercise, write a few emails and generally relax in the hotel. Having completely fallen off the low-carb diet wagon since arriving in Japan, I took the opportunity to indulge in a potato and bacon bread roll at the on-site bakery – which I promise tastes far better than it sounds! 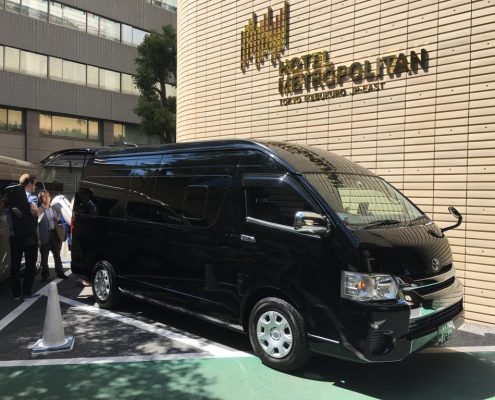 Mid-afternoon and we set off to Showa Music University, the venue for our day’s masterclasses and concert. The “battle bus” for this short journey west was a stylish black Toyota, which represented a significant upgrade on previous models used in our overseas expeditions, and came complete with a white-gloved chauffeur, who navigated Tokyo’s seemingly incomprehensible motorway system with consummate ease. Behind him, discussions ranged from the benefits of having an au pair, to the Beeching railway cuts of the 1960s and the Tory leadership contest! 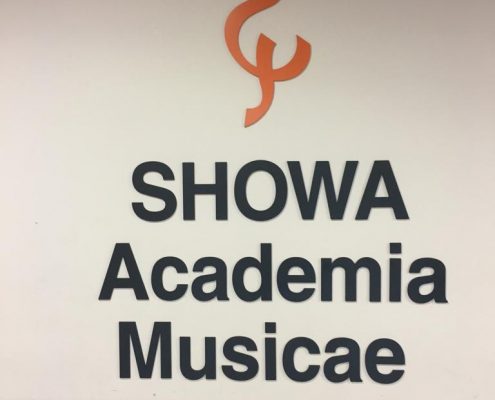 On arrival at Showa we were greeted by a welcome committee of brass professors, who duly provided sandwiches and tea (Fortnum & Mason’s, no less) while we took the opportunity of a relaxed warm up. Not content with having already completed Joe Wicks’ special hotel HIT workout earlier in the morning, Alan decided that a few extra burpees and lower back stretches were in order, while Pete entertained us on the piano with a couple of Septura specials – Debussy’s ‘Cathédrale engloutie’ and ‘la Fille aux cheveux de lin’ (no offence to Pete – who’s also a remarkably talented pianist, too – but these pieces really are #betteronbrass!) 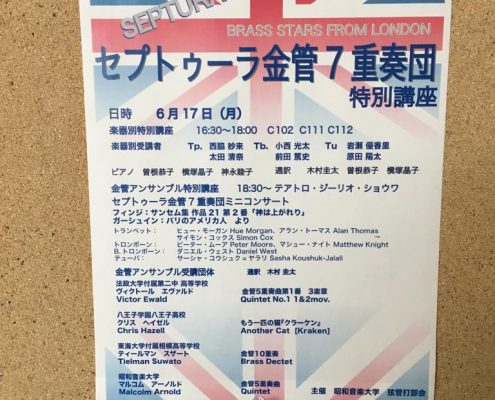 Our schedule for the day

Having split up into our respective instrumental groups for the first of the masterclass sessions, we were treated to some delightful playing by Showa’s most talented brass students, each terrifically well-prepared and sensitively accompanied. As is now customary in Septura trumpet classes, Alan, Simon and I “tag-teamed” our way through the session, which included music by Eric Ewazen and Vassily Brandt, discussing a variety of technical and musical elements. 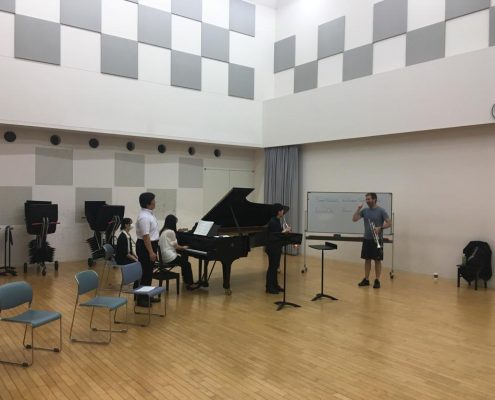 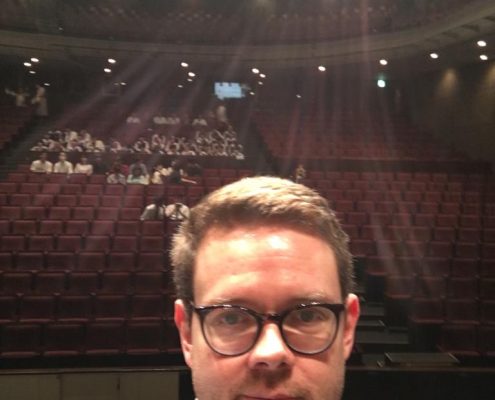 Huw in the hall

Our mini-performance followed – works by Finzi and Handel allowing us to take full advantage of the generous acoustics in the university’s concert hall – before the entire group led a masterclass with four young chamber music ensembles. These ranged from high school students playing Victor Ewald to the university’s own quintet, performing Malcolm Arnold, as well as classic PJBE ten-piece works by Susato and Chris Hazell. We were unanimously impressed with the high level of playing, and how receptive the students were to our suggestions. 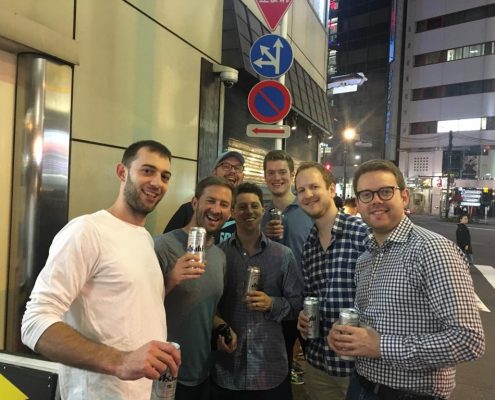 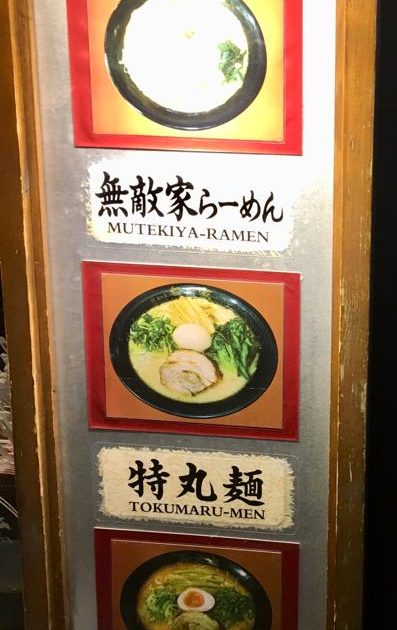 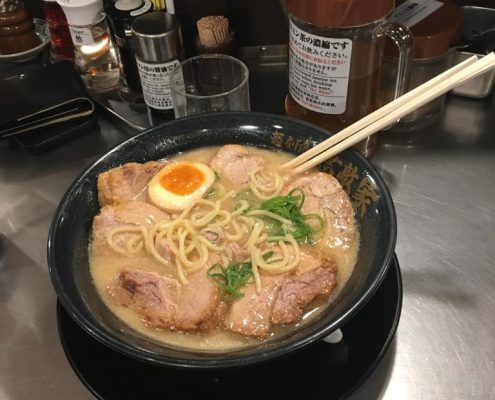 Having worked up quite an appetite, and with photos and autographs all done, it was back to the city. Unsurprisingly, given the success of the previous evening’s outing, our choice of dining establishment was an easy one, and we all enjoyed heading back to Mutekiya for another round of Tokyo’s finest ramen and gyozas. A quick whisky on the way back to the hotel seemed the perfect way to round off our last night in Tokyo, before getting some rest ahead of the following day’s Shinkansen trip to Kyoto. 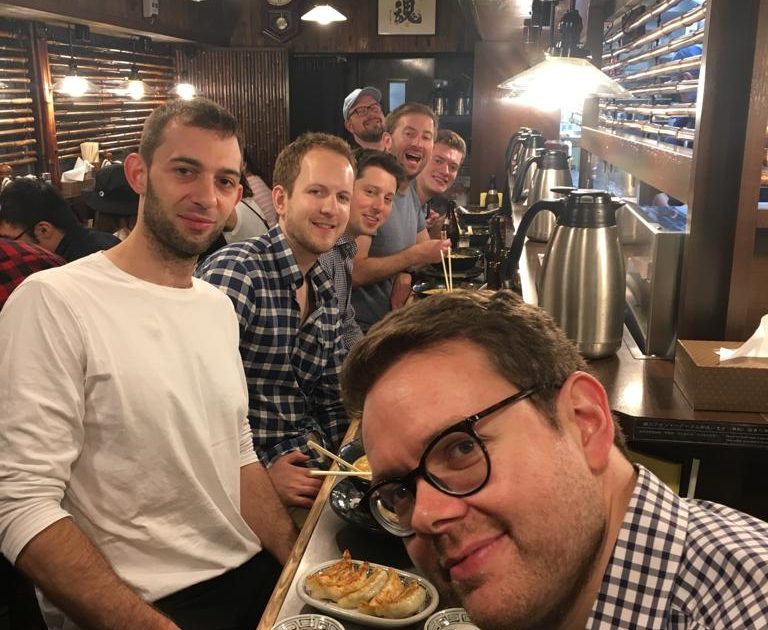